Imaginary Worlds in A MAZE. Train Station on VRChat

When the creation of a video game begins, the members of the studio who carry it out usually have no idea of what it will look like. Their visibility is limited at most to a few mental images and the formulation of a creative intention. But then, how and through whom does the metamorphosis of an abstract idea into an extended game world take place? The answer to this question invariably invites us to consider the role of the concept artist who, in the space of just a few decades, has established himself as a key player in the landscape of contemporary cultural industries. An actor whose outpost places him at the heart of the factory of the imaginary.

It is true that a concept artist is not only a talented designer, they are also and above all an explorer of ideas at the service of the entertainment industry. They intervene from the embryonic phase of the conception of a work and accompany a development studio in the formalisation of its ideas so that they can blossom on the screen in all their expressive force! Guided by an art director from whom he or she receives instructions, the concept artist’s main task is to translate concepts (playful, narrative and aesthetic) - via the construction of very specific graphic representations: concept arts.

These are conceptual images that help to preview an imaginary world, and whose forms embody an idea, a notion, a situation or an emotion. Once validated, they are transmitted to the production teams who take charge of their modelling. It is therefore through the concept artist’s images that the visual foundations of a video game are laid, from its environments and characters to its key narrative scenes. These representations frequently line the walls of the studios in a farandole of shapes and colours to guide everyone in the same direction! , Curatorial note by Marine Macq, Pixel Life Stories

All about the exhibition on Pixel Life Stories including the artist notes of the french artists.

The exhibition shows works by the following artists from France, Romania and Germany (German selection below). You can visit the exhibition on-site at Institut français Roumanie and in the virtual A MAZE Train Station in VRChat.

Requirements and instructions to jump into the VR exhibition.
1. PC Computer with actual 3D Grafics Card need or Oculus Quest 2 with Link cable.
2. Follow the instruction on VRChat or download it via Steam to get VRchat.
3. Make an account.
4. Login !
5. Go to menu point Worlds and look up for A MAZE. Train Station. Then click!
6. From the lobby you can go directly to exhibition by using the portal that
shows the Poster of exhibition “Virtual Imaginary”.

If you can’t jump into VRChat then please watch that video and get a feeling. 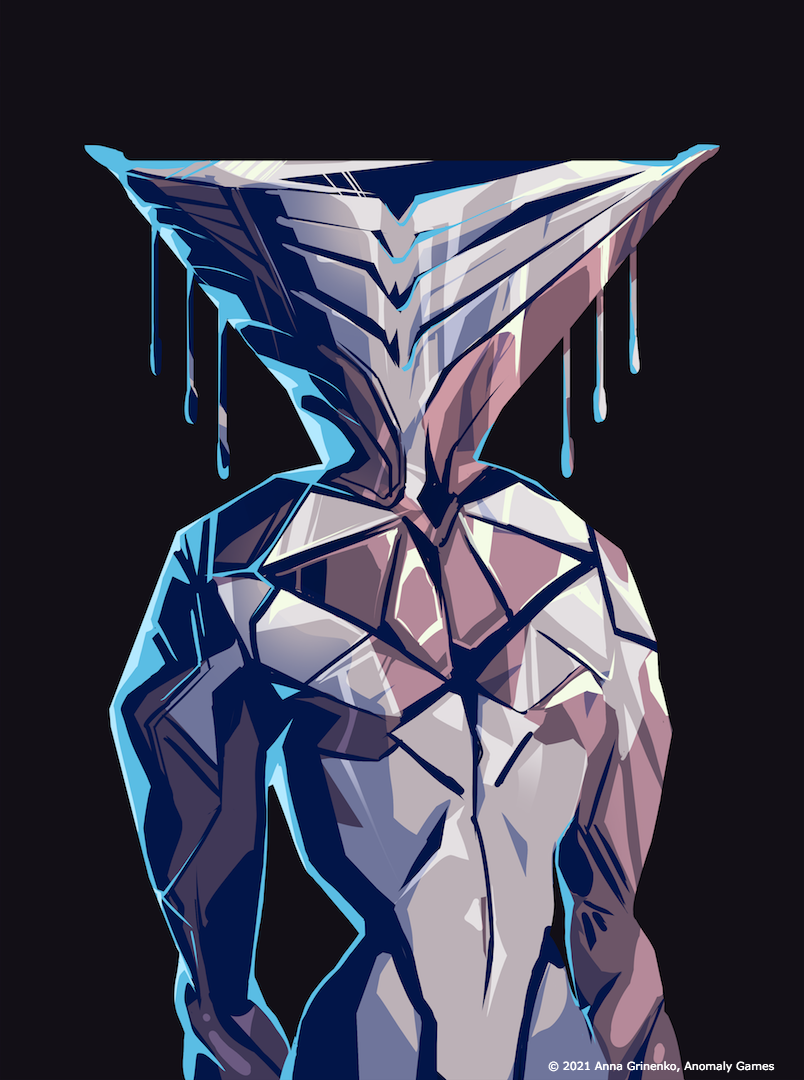 Artist note:
“The style throughout The Fermi Paradox is meant to look bold in colours and shapes, as seen here with the very triangular style of the spacesuit of the alien known as “The Faceless”. The characters all have very different silhouettes from each other to emphasise that life can go into very different directions.” 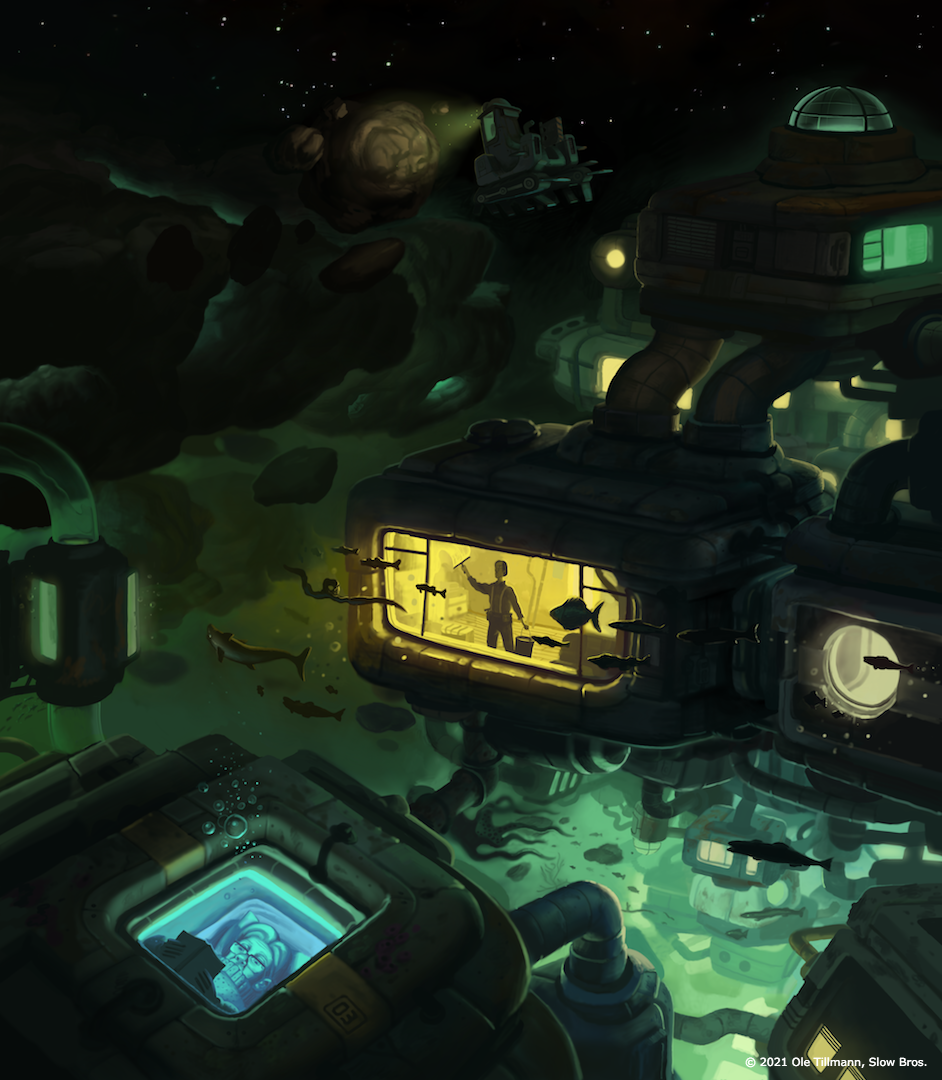 Artist note:
“The style for this piece of concept art was chosen for clarity and distinctiveness from the in-game aesthetic. Much like the game itself it is meant to convey a deep sense of atmosphere and immersion but end on a funny and/or awkward note. So out in space, deep beneath the ocean, amongst scattered spaceship debris a guy is cleaning windows while his boss is reading a book in bed.” 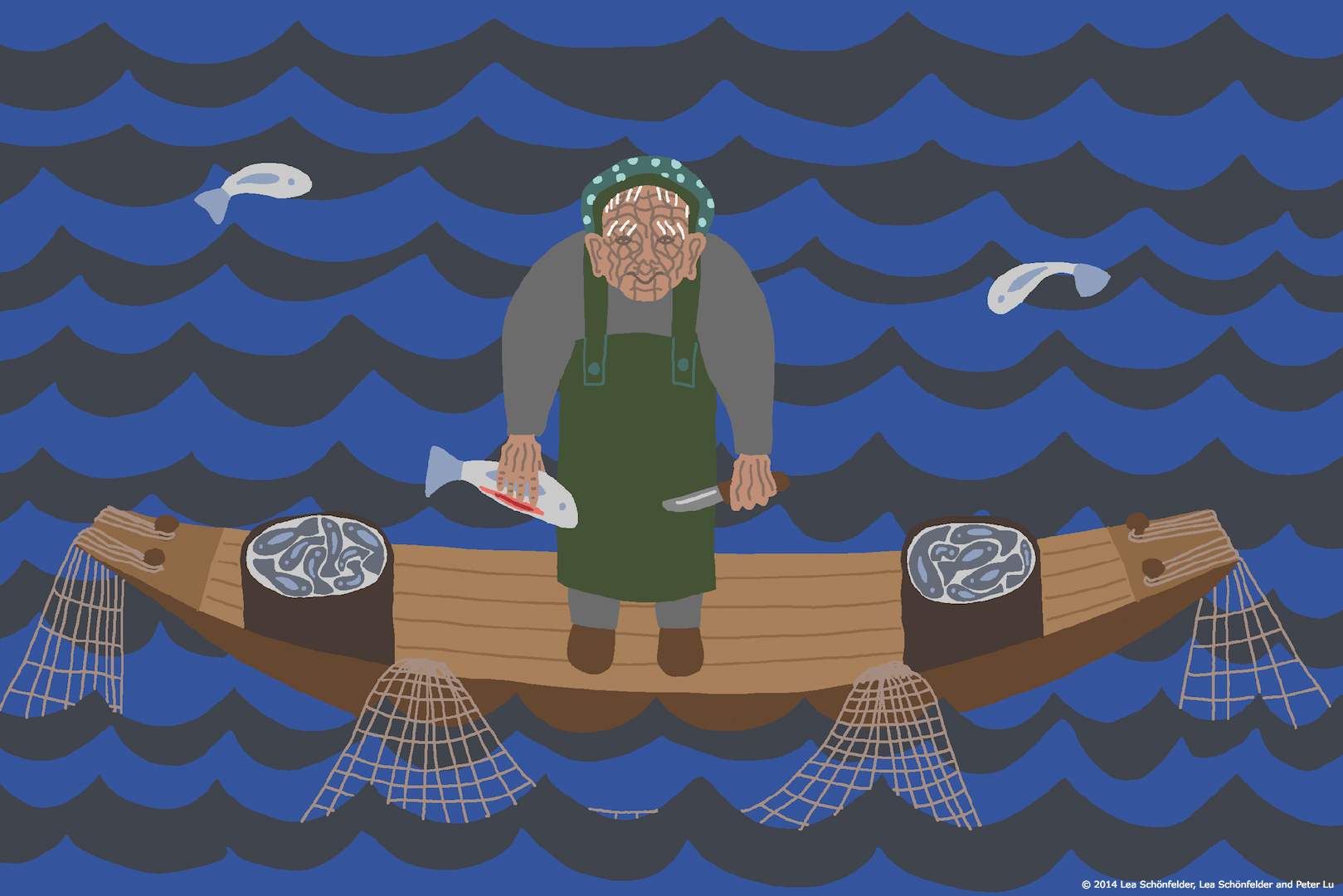 Artist note:
“A photo of one of the oldest people that ever lived, a Japanese woman, was the inspiration for this concept art. In the description of the photo it said she worked all her life. This picture shows a happy woman, who has lived a life full of purpose.” 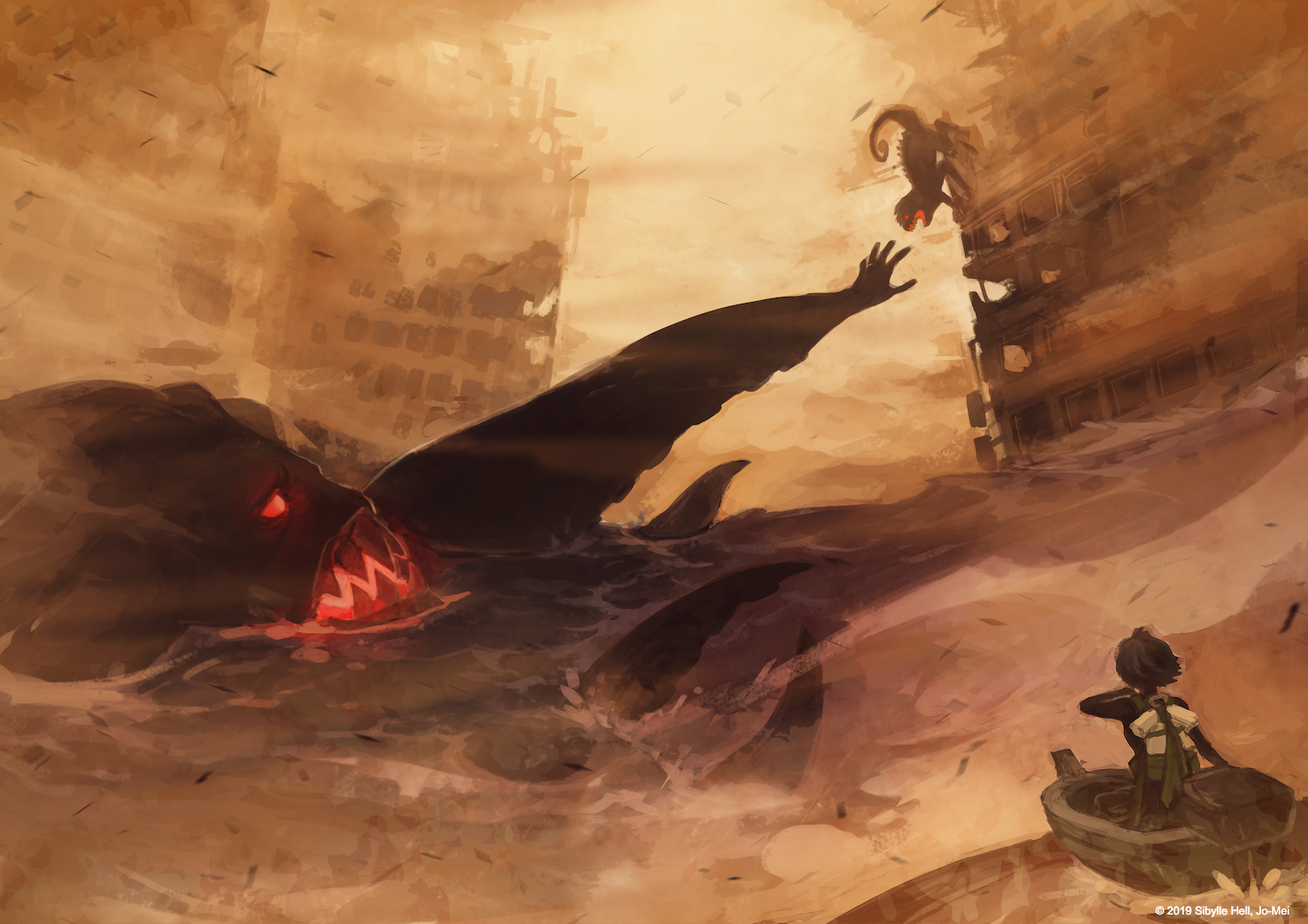 Artist note:
“This piece was created to depict the clash between two of the prominent monsters within the game. As the weather is strongly tied to the characters and their emotions, a storm was the best way to portray a conflict between two of them. The moody and harsh storm helps convey their desperation and rage and their struggle to find an understanding.” 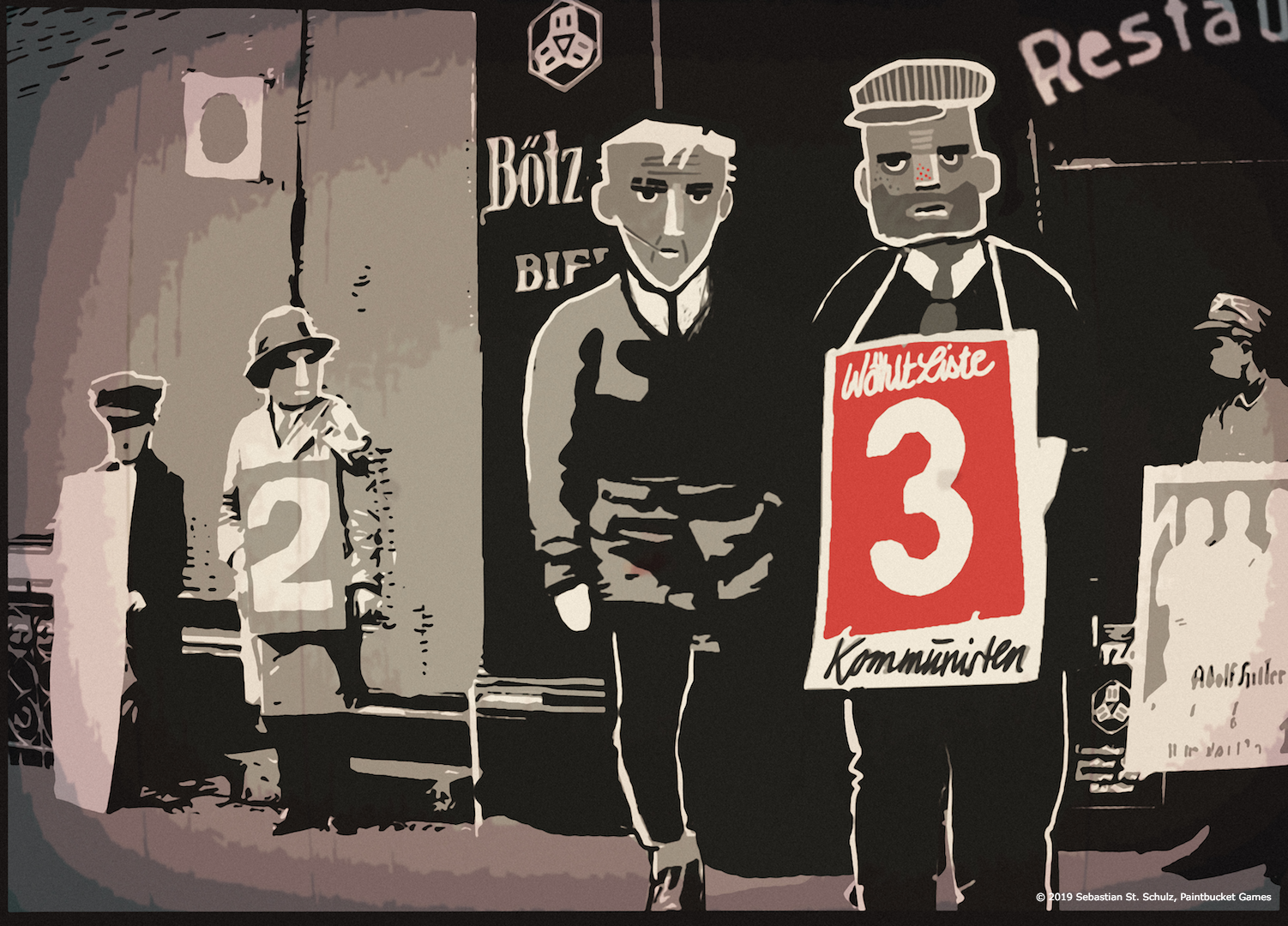 Artist note:
“Woodcuts and posters from the era of “German Expressionism” of the 1920s provided the inspiration for the art style of “Through the Darkest of Times”. The Nazis banned modern art of the years between the two world wars as un-German, so-called “degenerate art - Entartete Kunst.” We used the work of these artists as reference for our designs. The concept art shows the election campaign on the streets of Berlin, shortly before Hitler comes to power. The reduced grayscale color palette and the high-contrast red poster give the scene this unique and graphic look. The eyes of the main characters - fighting for the anti-Nazi party - are looking at you.”